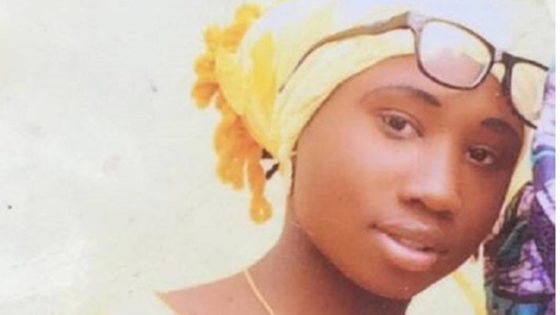 Leah Sharibu, a Christian girl kidnapped and held in Boko Haram captivity for over one year, has reportedly given birth to a baby boy.

Leah, according to Sahara Reporters, was delivered of the baby a few weeks ago following her forceful marriage to a top Boko Haram commander, according to a reliable source close to the terror group.

The source said Leah, who refused to renounce her Christian faith, was forced to accept Islam before being married to a top commander of the terror group.

Заголовки
Becky Sauerbrunn to be traded to Portland
There's Another Married at First Sight Cheating Scandal and This One Involves Stacey
All The Best Moments From BTS's "Tonight Show Subway Special"
Outdoor Voices Founder Tyler Haney Is Resigning From Her Company
Here's What We Can Figure Out About the Hayley-Michael Cheating Scandal on MAFS
Top Reasons Why Las Vegas Is The Best Place To Live
Enter the Hot Pocket Heiress
‘Strong sperm’ could impregnate women in swimming pools, claims child protection boss
How to see where you’re logged in on Facebook, Twitter, and Instagram
49ers give update on Jalen Hurd’s back recovery
Doutzen Kroes stuns in blue lingerie set after Milan Fashion Week show
Amazon Warns Sellers Not to Gouge Users on Face Masks as Prices Skyrocket on Coronavirus Fears